Sunday, August 14
You are at:Home»Center News»Center Visits the University of Calgary to Talk Free Speech, Press, and Religion in Schools

Dr. Kevin Johnson and Dr. Jennifer Asenas visited with over 80 students at the University of Calgary to discuss comparative legal perspectives on freedom of speech, press, and religion in the education context. Drawing on his experiences arguing in the Canadian Supreme Court, Dr. James Kent Donlevy of the University of Calgary introduced the principles of peace, order, and good government as found in Canada’s Constitution Act, and also provisions found in the Canadian Charter of Rights and Freedoms. 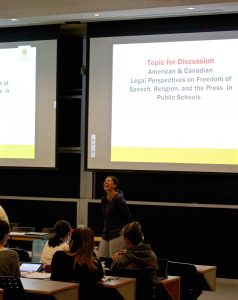 The Center’s speakers introduced principles of life, liberty, and the pursuit of happiness, and the students engaged in thoughtful reflection by comparing and contrasting the different values emphasized in founding documents of the Canadian and American legal systems.

Speakers from the Center introduced many of the facts of famous landmark cases in the Supreme Court concerning the rights of students. In many cases, the Canadian legal system appears to view educational rights of students in many of the same ways as the American legal system does. However, one notable difference became apparent when one of the students introduced to the Center an example from their Catholic public schools. The separation of church and state is virtually non-existent in the public school system of Canada, with religious schools receiving public funding by the government. Students found it interesting that in the United States we do not directly fund religious schools.

The students represented some of the best in Canada. All of the 80 students had earned at least one degree. Included among them was a lawyer, a Ph.D. in Greco-Roman Studies, three psychologists, and others of many professions. The Center looks forward to many continuing conversations to investigate First Amendment principles with future Canadian collaborations. 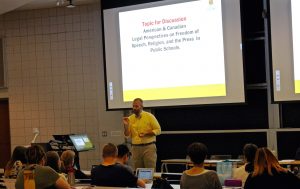